I’m in the legal profession and I don’t have to worry about modeling related nonsense, like being hit on by creepy old people or waking up one morning to find that I’ve suddenly been pegged the world over as a sufferer of depression.

Just joking, by the way.  I never wanted to be a model… *sniff…  Any who, like with most awkward moments in my life, I simply barrel through one by drawing attention to another.  In this case, it’s the very real story of a Manhattan model by the name of Gwendolyn Bucci who recently found herself in that very situation. 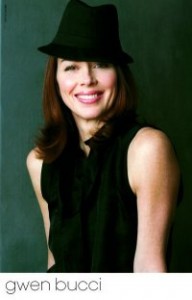 Bucci’s image was used on advertising material distributed by the pharmaceutical company Eli Lilly & Company in order to market Prozac, the company’s    anti-depression medication.  Bucci alleges she was unaware of her image being used for the advertising and states that she never authorized Eli Lilly to use    it in their Prozac campaign.  You can probably guess what happened next.  Bucci orders Eli Lilly to remove her image, but, of course, the company refuses    to do so.  And now she’s locked in a legal battle with them where she is suing Eli Lilly for $450,000 in damages.

The problem is that Bucci, in my opinion, has no chance of ever winning a dime of that $450k.

Though I haven’t had the chance to get a hold of her complaint, it seems pretty certain based on the facts that at least two of Bucci’s possible claims are for    infringement to her right of publicity and defamation.

The right of publicity is a law that basically protects your image, likeness, voice, name or performance style from being used without your permission to       sell or endorse a product.  To establish a claim under this law, one generally must prove three basic elements: (1) the image used is of you, (2) your image    was used for commercial purposes to endorse or sell a product, and (3) the public must be able to identify your image.  Seems pretty straight-forward,      right?

Bucci can easily prove the first two elements as the image is of her and that it also appears in a commercial advertisement for Prozac where viewers would likely infer that she used the drug and that it cured her depression (in essence, an endorsement).  However, the problem is the last element.  As painful as it is for any model/actress to hear this, it’s very unlikely that any court or jury would find that Bucci has any mass public recognition.  I mean, I had to Google her name and look through her IMDb profile to figure who she was, and even then I’m still not a hundred percent sure the profile I found is actually of her.

For most people suing under this law, this last element is where their case generally falls apart.  Because unlike when Tom Cruise and Nicole Kidman sued Sephora for using their images without permission to sell Sephora products, Bucci’s suit lacks the same teeth because most of the public have no idea who Bucci is and probably couldn’t pick her out of a police line-up.

Bucci’s other potential claim, defamation, is on equally shaky ground.  Defamation can be either slander, which is spoken statement, or libel, which is what it’s called if it’s done in print.  Of the two, libel is applicable in Bucci’s case since she alleges her image was used in a Prozac print ad.  In case you haven’t seen “The People vs. Larry Flynt,” defamation laws protect a person from having false and malicious statements or portrayals made about them to the public which injure that person’s reputation.

The elements to establish a defamation claim are very similar to the right of publicity.  Essentially, one must show that a false statement or portrayal of a person was communicated to a nonessential third party and that it was harmful to that person’s reputation.  Once again, this seems like a very simple analysis in Bucci’s favor, but like all things in law, problems are often more complicated than they initially seem.

Here, though Bucci once again has no problem showing the ad falsely portrays her as a depression sufferer and Prozac user, she’ll likely have issues showing that it actually harmed her reputation.  This is because once again the public has no idea who she is.  Though the law only requires that it be communicated to a nonessential third party, there likely isn’t any harm because anyone who knows her would probably also be aware that she’s a model and thus often has her image used to endorse all sorts of things.  Therefore, once again Bucci doesn’t have a leg to stand on.

However, on top of all this, Eli Lilly probably has a wonderful defense against Bucci’s lawsuit because more likely than not the company probably purchased the photos of Bucci from a modeling or advertising firm that owned and was authorized to sell her image for marketing purposes.

Though you still got to hurt somewhat for Bucci, even though she probably can’t prove harm on a legal level, no doubt it’s got to suck being the butt of your friends and family’s Prozac jokes.